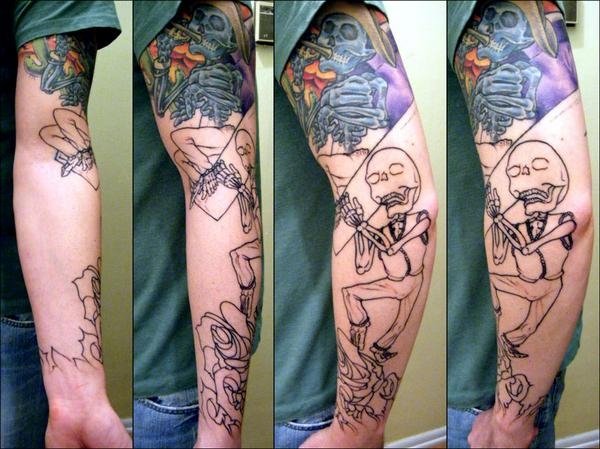 I got my first tattoo in Panama City Beach on spring break 2006. I had always wanted tattoos once I seen some of friends getting them. But I had no idea what I wanted. What would I get on me that I’d be ok with having for the rest of my life? Well, I decided on just a design that was in a book at the local tattoo shop. It doesn’t really have any meaning besides that spring break trip and it was my first. Of course my mom wasn’t happy when I came home with it, but I explained it wouldn’t prevent me from getting a job or anything, “Look, I can cover it up with a long-sleeved shirt.” I got it on my left forearm and at the time, it seemed like a huge tattoo! Some people were in full support of it, others shook their head. Tattoos were still not always accepted.

A few months later, me and a couple friends wanted to get matching tattoos. We drove around to a couple places on a Friday night and couldn’t find a place that would do them so late at night. We were all amped up to get them, and no one would do it. So we all waited til the morning and went back to Blue Byrd Tattoo on Brown Street in Dayton, Ohio. A group of four of us went down, and three of us were getting the tattoo. It was a UTF tattoo on the back of our left arms. UTF basically stands for U-Town’s Finest, a big group of friends from Union, Ohio. Well, most of us had lived in Union for a big part of our lives and we were one big, tight crew, so we said, “Ya, let’s do it!” The artist was Billy Franklin and we were there for a couple hours just all talking about random stories of past tattoos, drunken nights, crazy parties, girls, etc… We were all stoked to have something inked into our skin that signified the bond we’ve had as friends and for more great memories to come.

The fall of 2007 is when my next tattoo adventure started. Unfortunately, my grandmother passed away from cancer. I took it pretty hard, but this was also about the time I started to learn more about Día de los Muertos, or Day of the Dead. What I take from it is celebrating the life of a person that passed away, not mourning that they’re gone. Think about all of the great times you had with them, all the joy they brought the world, and how they meant so much to you. They wouldn’t want to look down from Heaven and see you being sad for the rest of your life, so stay positive and celebrate their life! So I went back to Blue Byrd, at their new location a mile or two away down on Wayne Avenue. My friend Chris Merrell had been getting some excellent work done by Britton Asbury, so I asked for him and away he drew. I came back a couple weeks later to see a badass half sleeve design and was ready to get the outline started. This was my first big piece and after showing it to my mom, she was disappointed again that I was “ruining my body” but I think she also realized that I was going to be getting tattoos forever.

At first I wasn’t sure if I wanted to do black/gray or do full color. A couple months later, I went in and asked for his advice. He said full color all the way. I was leaning more towards that, so I said go ahead! From December 2007 until now, I’m still getting more color work done on this, except now it’s a full sleeve (my right arm). There is a lot of money involved, and a lot of painful hours in the chair, but the outcome is amazing. The whole sleeve is the Day of the Dead theme. It’s basically a bunch of skeletons having a big fiesta. It will probably be sometime in 2011 before it’s actually complete.

The other tattoo I have is on my upper chest area. At the end of March of 2009, I put my two weeks in at my job of over five years. To me, I felt this was a huge risk, but I don’t want to regret any risks that I take. I know I will learn something from every risk and will learn more about myself as a person. I had accepted a new job and before I started, I wanted to get a quote I made up tattooed on me which kind of symbolized this moment… “risk without regret”. I have been saying this quote for at least a couple years and it just made sense to me. So I called up Britton again and I stopped in to get it done. It’s all black/gray in a cursive handwriting type of font. This is probably my favorite tattoo and the one people rarely ever see.

At my last job, I feel they didn’t really like the tattoos and I definitely stood out in the small company. But they dealt with it anyways as I did good work and would cover them up if I was meeting with customers. At my current job, it’s just a two-person company and the owner is totally cool with them and they show off my creative side. But I still cover them up for client meetings. At my new job, that I start in less than a week, I’m sure they won’t be thrilled but I don’t think they will mind since I will be hidden up in the art department. But I’ve always made it a point that I won’t get any tattoos on my hands, neck, or face so I can always hide them with a long-sleeved shirt and pants. With them all covered, I look like a normal guy. With a t-shirt on, you might think I’m this big rebel (which I’m not). There are always stereotypes that come with anything that’s not normal, and I’ve accepted that. When someone asks about my tattoos, I have no problem telling them anything they want to know.

I feel they are more widely accepted now than even a few years ago. Definitely more now than 10+ years ago. I quickly found a couple stats about tattoos… In April 2006, it was reported that more than 45 million Americans have at least one tattoo. In January 2007, 36% of 18-25 year olds had at least one tattoo. I couldn’t imagine the stats now. I would almost guess it’s a coin flip if a person 18+ has a tattoo or not. Some of the people you see I bet you wouldn’t believe they have tattoos. Doctors, lawyers, CEOs, teachers, etc… Every profession has a tattooed person in it. I’m in the art field and I assume this is one of the largest groups of people with tattoos, maybe about the same as musicians. With shows like Miami Ink, LA Ink, Inked, etc… making tattooing more mainstream, everyone is getting tattooed.

In closing, I just want to say I love tattoos. I hope I can convince others to join in on this amazing form of art and to not be so afraid of it. Do your homework and find out what artists in your area do the best work or go to a tattoo convention which usually has tons of famous artists from all over the world. One that’s close to home is Hell City in Columbus, Ohio. I was hoping to actually get a tattoo there this coming year, but I see it’s not going to be back in Columbus until 2012. Some artists that have great work that come to mind are Durb Morrison, Kyle Cotterman, Mike DeVries, Joe Capobianco, Josh Woods, Timothy Boor, Nikko Hurtado, Justin Wilson, and so many more. Good work isn’t cheap. Cheap work isn’t good. You get what you pay for and tattoos are for life. Choose wisely, trust your artist, and be happy with your tattoos.